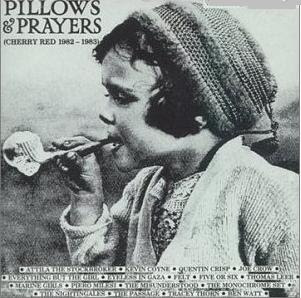 Pillows & Prayers is a compilation album released for Christmas 1982 by Cherry Red records. The record was originally sold at 99 pence, which helped ensure that the album peaked at number 1 in the UK Indie charts for 19 weeks and sold over 120,000 copies. UK Pop at its finest!! Artists Included : Monochrome Set, The Felt, Quentin Crisp, Nightingales, The Misunderstood, Attila The Stockbroker, Eyeless In Gaza, The Passage, Five Or Six, Thomas Leer, Everything But The Girl, Joe Crow, Piero Milesi, Kevin Coyne, Ben Watt and Tracy Thorn!
http://rapidshare.com/files/60428513/pillows___prayers__cherry_red_1982-1983_.rar.html
Posted by punkdeleimon at 7:38 AM

sorry but one track is missing
(marine Girls).

Goddamn it!
A track is missing!

Above is joke.
Love this compilation: had it first time round.
Thanks!