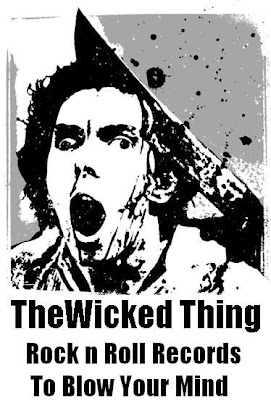 Posted by punkdeleimon at 6:54 AM No comments: 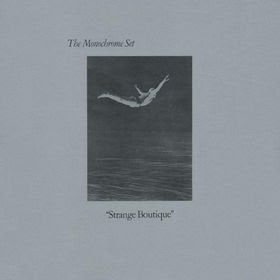 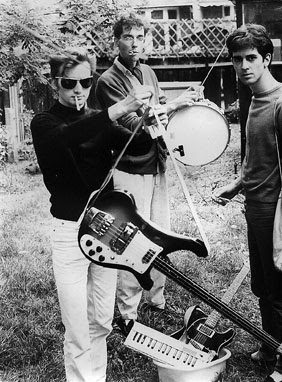 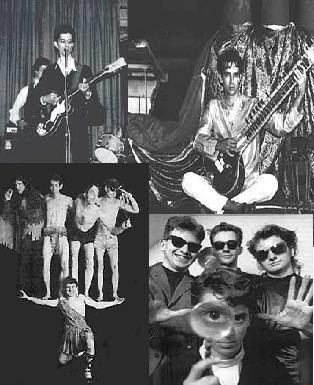 "Strange Boutique" Is The Awesome Debut Of One Of The Most Important British Bands Of The Post-Punk Period, The Mighty Monochrome Set. They Represent The Art And Brilliance Of Anti-Conventional , Psychedelic Pop Punk Three Minute Song. Simple "Strange" And Beautiful!!!
When the British art-school punk band the B-Sides changed their name and direction to become Adam & the Ants, guitarist/vocalist Bid and guitarist Lester Square opted out to form their own group, the Monochrome Set. Founded in London in 1978, the band was quickly snapped up by the Rough Trade label, and during 1979 issued three singles - "He's Frank," "Eine Symphonie des Grauens," and their signature number, "Monochrome Set" - all completely different in content and stylistic approach. In 1980 the band released their debut album, the cabaret-flavored Strange Boutique, followed later that year by the singles "405 Lines" and "Apocalypso" as well as another, more accessible full-length effort, Love Zombies. They returned in 1982 with a cleaner, more melodic sound on the LP Eligible Bachelors; "The Jet Set Junta," a satiric jab at the Falklands Islands conflict, became a significant hit the next year. The band have had a long association with Cherry Red Records - releasing countless well received albums on the Cherry Red and El labels until they disbanded in the mid-1990's. Their recordings remain immensely popular and, the first ever DVD to feature the band, "Destiny Always Calls Twice" will no doubt be snapped up by their devoted fanbase. The DVD consists of a collection of promo and live material originally released on VHS in the early 1990's under the title "Destiny Calling", along with some extremely rare bonus material featuring the band performing in Japan and the USA. Amongst the tracks featured are independent chart top twenty hit "Jacob's Ladder"
(Additional text: Cherry Red records)
http://www.youtube.com/watch?v=TrGe6n7T7DA
Posted by punkdeleimon at 7:14 AM 1 comment: 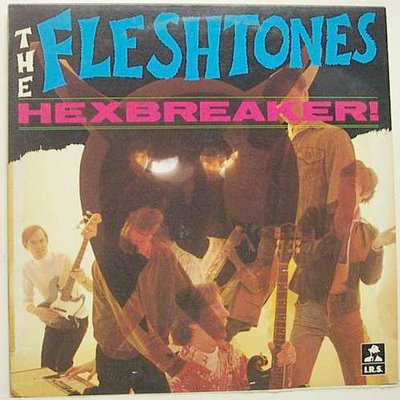 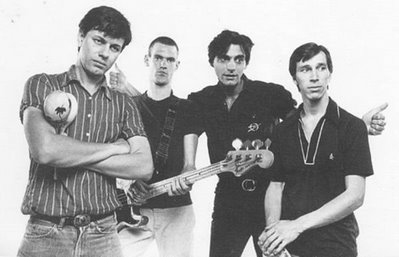 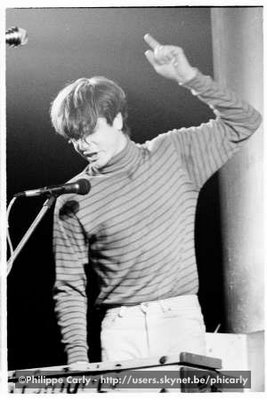 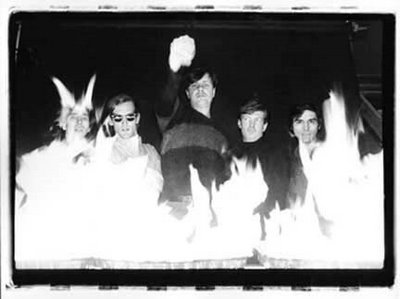 Second Release And One Hell Of An Explosive Garage n Roll Party Monster From The Mighty Fleshtones.

Time has always stood still for the Fleshtones. Old- fashioned in sound when they began plying their "super- rock" trade in New York's skankiest night clubs in 1976, the Queens group's determined mediums — singer Peter Zaremba, guitarist Keith Streng and drummer Bill Milhizer — have never stopped channeling the spirit of every great rock'n'roll party band that ever stepped to it, from the Coasters to the Kingsmen, the Raiders to the Kinks. Decades down the pike, they're still going strong, making great entrances and stylish exits and pouring it all out in uplifting sets of smart and sassy uptight bliss in between. Amazingly, Streng and Zaremba's aged-in-the-studio songwriting hasn't lost its colorful zest, which means that the group's recent albums are just as likely to prove wide- eyed and wonderful as their first blasts of serious fun. Somewhere along the way, self-conscious re-creation became subconscious reality for the Fleshtones, which makes them something of a perpetual motion machine.

Hexbreaker! is outstanding, an exuberant collection of memorable numbers made even better by brilliant playing and spot-on production by Richard Mazda. "Right Side of a Good Thing," with its hysterical falsetto chorus; "New Scene," a pulsing fuzz-guitar punk raveup; and the shingaling title tune all roll with soul and frolic in the sounds of the '60s without ever losing a grip on the band's own identity. An ultimate '80s garage- rock classic.
(Additional text: Trouserz Press)
Posted by punkdeleimon at 12:34 PM 3 comments: 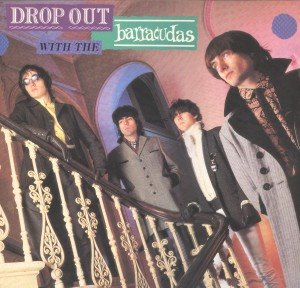 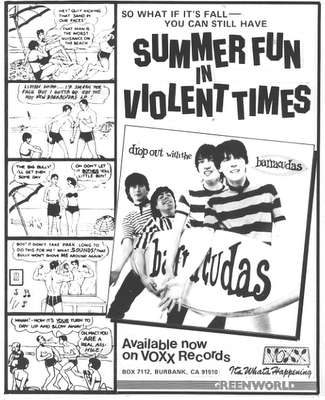 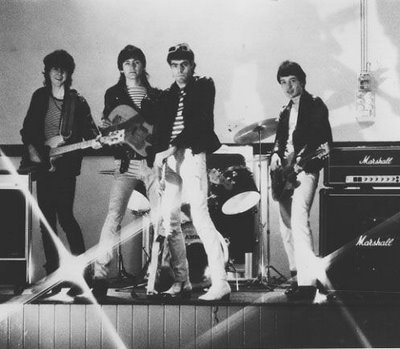 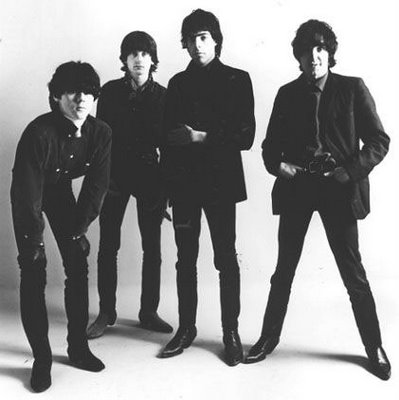 They Wish It Could Be 1965 Again And they probably Acheived It. They Were One Of A Few bands To keep the Beach boys' Surf Cars And Girls Ethos Alive In Punk. This LP Is The Sound Of Phil Spector Being Dragged Into The garage!!

Despite a cheerfully self-deprecating stance, London's Barracudas offer quite an enjoyable sentimental journey through assorted American traditions on Drop Out. Some tunes plunge headlong into dense, ringing folk-rock — see "Violent Times" or "I Saw My Death in a Dream Last Night" for an update of the Byrds on a gloomy day. Surf tunes like "Summer Fun" and "His Last Summer" strive a little too hard for laughs to overcome fundamental flimsiness, but are fun and can't be faulted on attitude. (The UK and US versions of the LP differ by a track.)
(Additional text: Trouzers press/Mojo Magazine) 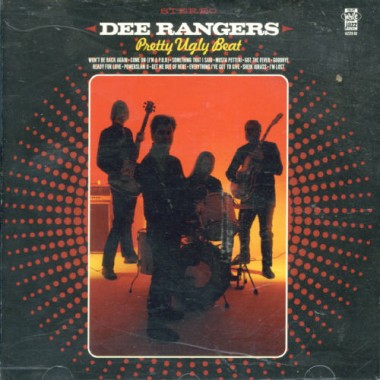 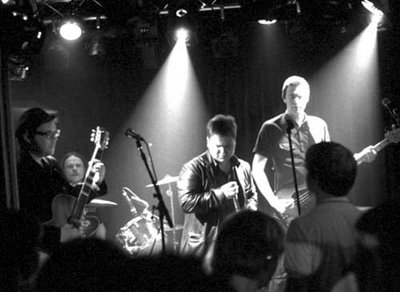 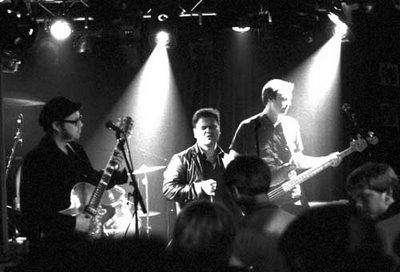 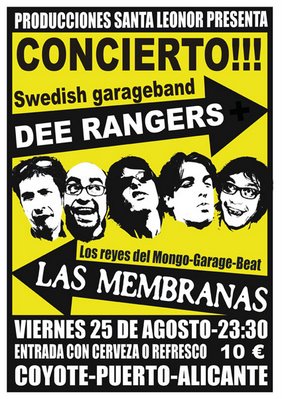 Debuting in 1997 with the EP This Modern world, Dee Ranger imported their vintage of 60's guitar romp to their home country of Sweden. With their reflection towards the raw styling of the sonics and the kinks, nicke ohman (guitar), johny elfstorm(bass), uffe petterson (drums) and mike eriksson (vocals) would release a series of seven-inches various labels throughout 1997. This includes the Fall Down, I Just Wanna Rock 'n' Roll and Don't EPs.
Posted by punkdeleimon at 6:22 AM No comments: 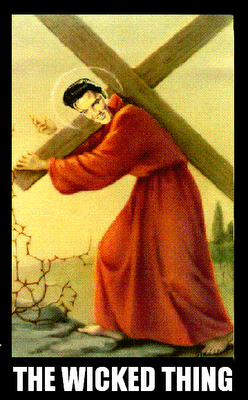 Posted by punkdeleimon at 6:29 AM No comments: